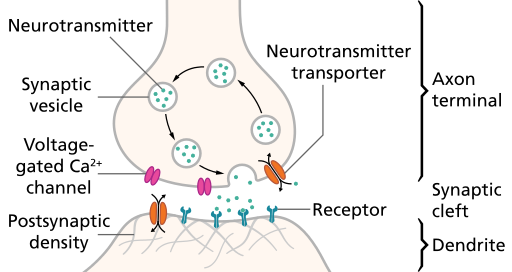 The synapse is made up of:

Synapses are a complicated multi-input organisation arising in the release of many different neurotransmitters from both neurons and glia. Synapses are depicted as distinct pre- and postsynaptic parts, situated at particular segment places. Each segment may have any amount of anatomical synapses of any sort, identifying which other sections it is pre- or postsynaptic. A synapse can be formed when a group axon grows close enough to a target group element. The synapse "type" can be owned by both groups. These primitives can lead to synaptic triads or serial synapses. Synapses play an incredibly significant functional role in shaping real brains, but at current simulated synapses are almost solely anatomical, with little maturation and physiological effects.

Neurotransmitter molecules spread across the synaptic cleft and attach on the postsynaptic cell to receptor proteins. Postsynaptic receptor activation leads to ion channels in the cell membrane being opened or closed. This can be depolarizing— making the cell's inside more positive — or hyperpolarizing— making the cell's inside more negative depending on the electrons engaged.

Inhibitory Ion Channel Synapses:
These synapses have chloride channel neuroreceptors. When the channels open, negative ions flow as a result of local hyperpolarization and less probable action potential. Thus, an impulse in one neuron can inhibit an impulse in the next with these synapses. Glycine or GABA is typical neurotransmitters.

Electrical Synapses:
The membranes of the two cells effectively touch in these synapses, and they share proteins. This enables the capacity for action to move straight from one membrane to the next. They are speedy, but quite uncommon, discovered only in the heart and eye.