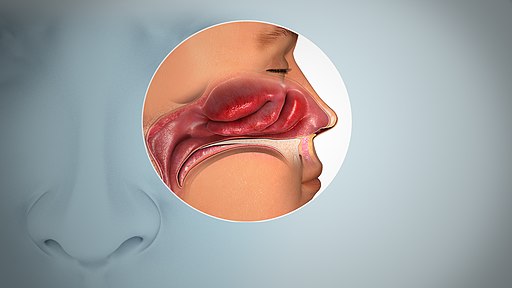 Anosmia is the name for a total or partial loss of the sense of smell.

Our sense of smell is extremely important. Whilst humans beings might not have the sense of smell as developed as a sniffer dog we certainly have a wonderful natural gift in our ability to detect scents and odours. According to one article human beings can detect the difference between a staggering 1 trillion difference smells.

Our sense of smell is perhaps underrated, and certainly we rely more heavily upon sight and sound to know that all is well in our environment. You cannot however see gas, but you can smell it. You might not be able to see that a meat is rotten, but your nose will detect it.

Being able to tell whether something is clean, fresh soiled or decayed has been essential to our survival as a race. But in addition to the practical usefulness of scent, we also obtain from it a great deal of pleasure. I have a particular fondness for petrol vapours on a cold morning. It takes me back to winters in childhood tucked up beneath blankets whilst the petrol tanker filled the reservoir at the local petrol station.

Smells are very evocative of memories and emotions and they help us feel differently about places and situations.

How wonderful is the smell of freshly mown grass, or the freshness of the turned soil after rainfall? How reassuring the smell of babies. How delicious the odours of baking bread, roasting meat, or brewing coffee?

Smells make us feel differently about others and ourselves. Some people find sweat offensive, others are aroused by it. Some people feel naked without a perfume. Whilst the smell of an aftershave can make a man feel more confident and attractive.

Imagine living in a world where you cannot smell your loved one, in which the odour of a book is lost to you. Imagine living without the ability to participate in one of the senses that everyone else is enjoying and taking for granted!

Indeed such was the situation in which a client found herself. She has lost her sense of smell permanently due to illness. It was a huge loss to her, not just because food and drink has lost their savour, but because she had once adored the scent of jasmine and had grown it in her garden.

As she told me about this lost of scent from her life tears welled up and rolled down her cheeks until her chest and shoulders began to heave as she sobbed at the loss of the beloved fragrance of jasmine and sage from her life which had previously brought her so much joy and were associated with so many happy memories. She felt that all those memories were ruined. That her enjoyment of her garden was ruined. She felt it was particularly cruel that friends could forget during meals and gatherings, referring so openly to the aroma of the dishes, or by inviting her to catch a whiff perfumes, forgetting that this is now a world forever closed to her.

As her emotion reached what appeared to be its highest pitch I gently said her name to focus her intention on my intructions and asked her to keep that memory in mind as she followed my finger in the complex kinaesthetic pattern of eye movements. As she did she screwed her eyes up and shuddered under the weight of another sob as I asked her to keep it as clearly focussed as she could.

And then something wonderful happened. Little by little the tears stopped. She began to relax until she looked at me full in the face and asked what had happened.

Yes. She was still without her sense of smell. But the pain of that loss was now rapidly receding.

Memories of being that upset had somehow changed, and the possibility of being annoyed at forgetful friends inviting her to sample a perfume in the future seemed so far away as to be unlikely.

Two weeks later she told me, that whilst practicing self-hypnosis she imagined herself along a path she used to tread daily whilst on a holiday long ago. The path was bordered by sage on both side, “and do you know” she said “I enjoyed it.”

Gavin Bowtell, Dip.Hyp. HPD, BWRT(adv) is a IEMT practitioner and hypnotherapist living and working in Chigwell, Essex. He is noted by clients and colleagues for his acute observation and incisive listening skills which focus in quickly on the nub of the problem.  He is the author of popular hypnotic scripts and co-author of a therapists’ manual for working with LGBT+ clients. He has advanced qualifications in BWRT, archetypal parts work, and specialist diploma in psychosexual disorders. https://www.essexmindcoach.co.uk